Once the initial fervour that welcomed the declaration of war ended and a quick victory was obviously not possible South Cantabrians settled in to support the war effort the best they could.

Local patriotic societies were a focal point for communities throughout out New Zealand. The Timaru Patriotic Society was headed by mayoress Florence Guinness, who based herself at the council office. The society gave gift parcels to departing troops and sent supplies overseas, including food, warm clothing and Christmas cakes. These efforts were supported by numerous other societies, guilds and schools. The Red Cross Society and St John Ambulance Association also raised funds and gathered goods to support military hospitals and the welfare of wounded troops. Meanwhile, Florence Guinness’s husband, Timaru Mayor Edwin Guinness, also swung in behind the war effort supporting community efforts and farewelling and welcoming local troops.

The community efforts took place against the backdrop of growing casualty lists and the loss of South Cantabrians killed in the war. Tragically the Timaru Mayor’s family lost two sons in the war; Francis (Ben) killed at Hill 60 at Gallipoli in 1915 and Arthur Grattan at Passchendaele in 1917. The Guinnesses were just one South Canterbury family amongst numerous others who felt the pain of losing loved ones in the war. 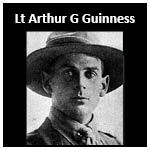 The first Anzac Day was observed in 1916 and began as a patriotic recruiting drive rather than the commemoration it is today. Returning veterans of the war formed the New Zealand Returned Soldiers’ Association (RSA) three days after the first Anzac Day to focus on the needs of former soldiers. Locally the South Canterbury RSA was founded in May 1916 and set up clubrooms on Church Street, Timaru. By 1919 RSAs had also been formed at Temuka, Waimate and Geraldine.

Peace on the Western Front finally arrived with an armistice on 11 November 1918. New Zealand troops at the front greeted the news in a matter of fact way while at home there were wild celebrations. 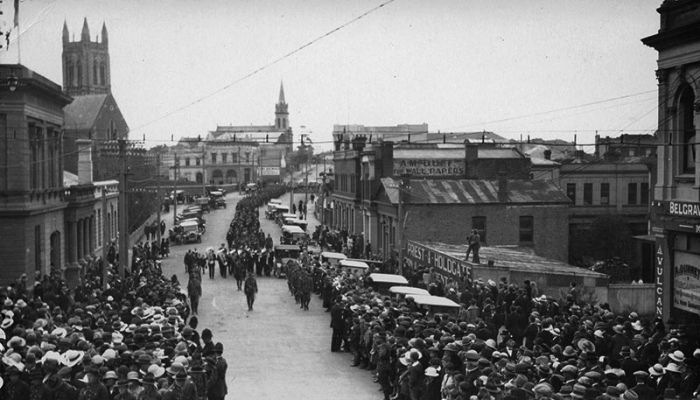 Timaru was alerted of the news by the ringing of the firebell shortly after 9am on 12 November. Immediately people stopped work and took to the streets to celebrate. Festivities were held throughout the district. In Pleasant Point the day after the news there was a celebration that was the biggest in the town’s memory.

There was more rejoicing in July 1919 to mark the signing of the peace treaty. Timaru was decorated and there was a large procession down Stafford Street. That night there were fireworks and a bonfire at Caroline Bay. Two days later some 6000 people gathered in Caroline Bay for a ‘Children’s Day’ to celebrate peace.

Bringing soldiers back into the community was a large challenge. Special Government departments helped soldiers train and find employment. Disabled soldiers were taught skills to make products sold in special stores. A special scheme began setting up soldiers on farms and around 186 holdings were established locally. Unfortunately some of these farms were unsuccessful. While there was joy at peace and the return of the troops, communities began the process of remembering the fallen. Since the dead were buried overseas local memorials were built. These took a variety of forms, such as the obelisk at Ashwick Flat or the gates at Cannington School. Such was the breadth of loss that memorials can be found in nearly every small settlement.

In Timaru work to build a fitting memorial to those lost started before the war had actually finished. There was a debate over the correct site for the memorial until a spot on the edge of the Botanic Gardens was chosen. The classic column memorial was officially unveiled on Anzac Day 1916 and has been added to over the years to mark the service of South Cantabrians in following wars.

The memorials throughout South Canterbury highlight the loss felt by the province and the need to honour those who had died during four terrible years of war.

By the end of 1918 over 1000 South Cantabrians had been killed. In the following years many others would die as a result of their wounds. Each death sent out deep waves of grief and loss throughout the community. 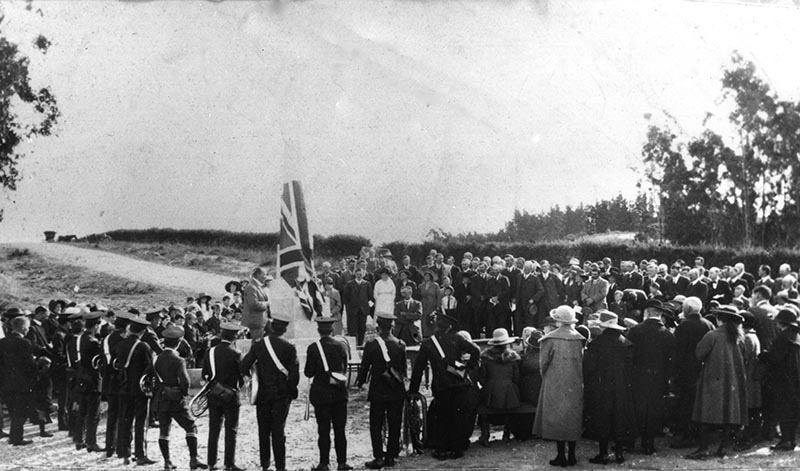