The deep impacts of World War I reached across generations and when the 100 year anniversary of the conflict arrived in 2014 South Canterbury honoured its legacy. Over the next four years there were numerous events, which tended to be focused around major anniversaries, such as the Gallipoli landings or the declaration of the armistice.

South Canterbury Museum and its staff were at the forefront of the commemorations of the war. The Museum held a number of popular exhibitions examining different themes or events, which were supported by education programmes that engaged local school students. The displays sought to tell the local experience within the wider narrative of the conflict. Exhibitions included the outbreak of the war, Gallipoli, the Western Front, Timaru’s connection to HMS New Zealand and its ensign, and soldier’s equipment. The Museum’s centennial exhibition programme concluded with the display ‘Enduring the Inferno’ which sought to tell the whole scope of the war in relation to South Canterbury. 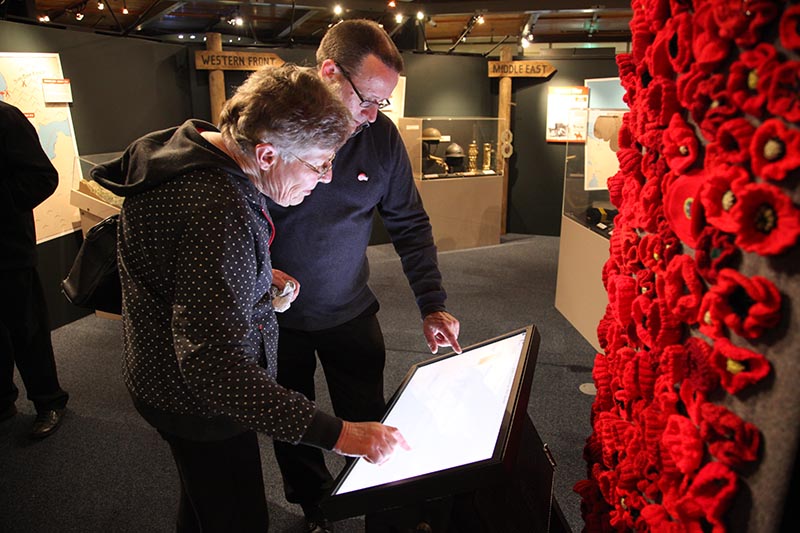 Pictured: A touch screen linked to the SCRoll database in use during the Enduring the Inferno exhibition, 2018.

A central part of the Museum’s work was leading the development of the online SCRoll database of thousands of profiles of South Cantabrians who served in the conflict. Partners in the project included local genealogists, museums, schools, newspapers, and families who supported the database by sharing the individual material and experience of service. The database continues to grow and will be an incredibly valuable resource for years to come.

In 2017, in the midst of the Hell Let Loose exhibition on the Western Front, the Museum’s temporary exhibition space became a theatre for the show ‘In Flanders Field; Passchendaele, swear you’ll never forget’. The show was written and performed by Timaru teacher Glenys Whittington based on the war experience of her grandfather who was a stretcher bearer in the war. Glenys’ performance was complemented by music by the Alpine Energy Timaru Brass Band and singing from local high school students. The show was an outstanding success and played to capacity audiences for three nights.

The trust undertook a wide range of community initiatives for the centenary period. Two of the most prominent were the White Crosses Project and the community interpretative panels.

The White Crosses Project saw a cross made for each local who died in the conflict and then all these crosses were displayed at Caroline Bay each Anzac Day. The interpretative panels, which focused on keys moments of the war and local impacts, were installed at Phar Lap Raceway and at a new commemorative area at Timaru’s Botanic Gardens.

At the end of the centennial the Trust funded a book based on South Canterbury Museum’s exhibition ‘Enduring the Inferno’. When the Trust was wound up its remaining funds were gifted to the Timaru District Council to help fund the ongoing maintenance of the interpretive panels installed by the Trust. 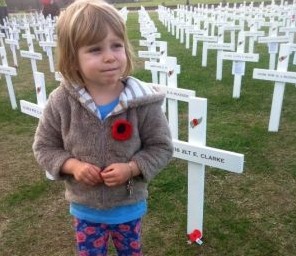 While the Trust and Museum carried out their projects there were countless other events and acts of remembrance, such as a statue of a departing soldier in Fairlie unveiled in 2014.

In Timaru the anniversary of the armistice was marked with a special dinner and auction which raised money for a new museum in Les Quesnoy, France. Projects and events large and small honoured the centennial in various ways.

The work of South Canterbury Museum, the South Canterbury WWOne Commemorative Committee Trust, and numerous other groups and individuals ensured the hardships and loss experienced by our community a century earlier was remembered and will be honoured into the future.

Pictured: South Canterbury WWOne Commemorative Committee Trust members and Museum staff with the book Enduring the Inferno which they funded, 2019.