On the Eve of War

1914: South Canterbury on the Eve of War was originally an exhibition that looked at our national and local response in the immediate wake of the declaration of war on 4 August 1914.

The assassination of the heir to the Austro Hungarian Empire, Archduke Ferdinand, the month prior had led to a sharp escalation in existing tensions between the European power blocks. War had already been narrowly avoided in 1908 when the Austro-Hungarian Empire annexed Bosnia. This time though neither side backed down. Europe erupted into war, dragging much of the world, including British colonies like New Zealand, with it.

For King & Country! New Zealand stands with the Empire

When King George V declared war on Germany, he did so on behalf of the entire British Empire. The New Zealand government and public responded with overwhelming fervour. This support might seem strange to us today, but the country was still closely bound to Britain by ties of kinship, nationalism, empire and a sense of still being British itself. As well as being a major economic partner, New Zealand was placed at the fringes of the world and still relied on Britain for its national security. 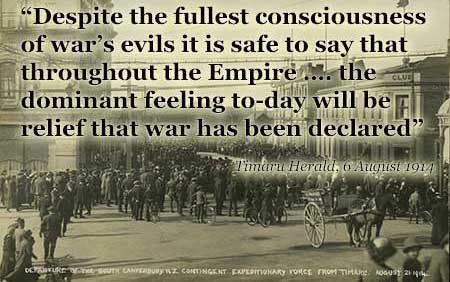 Media coverage of the unfolding mobilisation for war was unbelievably enthusiastic from our present day perspective.

The world had yet to experience the horror of either of the World Wars and had no awareness of the terrible toll that was to result over the next four years.

The public’s enthusiasm was evidenced immediately after the declaration of war (5 August New Zealand time) by reports in the Timaru Herald. They noted that large numbers of excited people were evident on the streets of Timaru. The crowds erupted in snatches of patriotic songs and kept themselves as up-to-date as possible by checking the newspaper’s public noticeboards for the latest news. 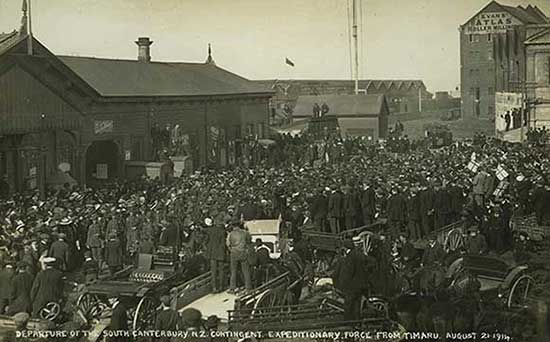 A rush to the colours

The New Zealand Government responded quickly by assembling an initial force of 8,500 men to form the NZEF (New Zealand Expeditionary Force) to aid the Empire. Locally men flocked to volunteer, with preference going firstly to men of the Territorial Forces, then to civilians with military experience – all were to be aged between 20 and 35.  Volunteers were first selected from local Territorial units - the 2nd (South Canterbury) Regiment and the 8th (South Canterbury) Mounted Rifles - then from men with military experience, and finally from civilians.

The government and public responded quickly to supply horses to equip the Mounted Rifles as they prepared for war. Special Horse Committees were established and inspectors began selecting mounts. Some horses were brought by the volunteers themselves while others were purchased from across the district or selected from stock gifted by the patriotic public. Many horses failed inspection – including those supplied by volunteers or gifted by the public. The rise of the motor car was blamed for a shortage of suitable animals. At the outbreak of war it was reported that there was 3,869 cars in the country including 751 across Canterbury. Motor cars also played a significant part in the community’s response though. Despite fears of petrol shortages local car owners donated their time and vehicles to provide transport. Stock inspectors were driven to select horses across the district and volunteers were ferried between Timaru and the military camp at the Showgrounds for medical inspections.

Security was an immediate concern for the Defence Department. Armed guards were set at local bridges until trains with troops headed for the front passed. For nine days the bridges were secured against possible sabotage.

Newspapers were aware of their responsibilities too, reporting in an editorial on 11 August 1914 that they must be careful: “…in these days of lightning communications, when news … is flashed round the whole world in a few hours.” At this time the first elements of the New Zealand Expeditionary Force (NZEF) were preparing to set sail to capture German Samoa. Britain had asked for New Zealand to seize the country as a ‘great and urgent Imperial service’ as it supported a German cruiser squadron that operated in the region. After sailing on 15 August the force landed and successfully occupied Samoa two weeks later. Following the capture of Samoa the press were thanked for their silence and the public encouraged to follow their example.

Setting sail for the big adventure

Back in New Zealand in late September, only six weeks after the declaration of war, troops from Canterbury left their training camp at Addington and boarded the Athenic at Lyttelton. Initially the troops from Canterbury only went on to Wellington. There they linked up with troops from other provinces for their last few weeks of training at Trentham military camp. Finally the NZEF embarked for France on 16 October 1914 on ten troopships, which linked up with the AIF (Australian Imperial Force) before heading across the Indian Ocean. The entry of the Ottoman Empire (Turkey) into the war in late October resulted in a change of plans - the force now disembarked in Egypt rather than France as originally intended.

In Egypt training, more training, and sightseeing around Cairo followed the troops arrival. This interlude came to an end in January 1915, when the assembled forces faced their first serious challenge. Turkish forces advanced across the Sinai Desert to reclaim Egypt for the Ottoman Empire. South Canterbury troops formed a small part of the forces that dug in to defend the Suez Canal. Under Major David Grant a South Canterbury contingent was amongst a force sent to chase some of the Turks into the desert. This proved to be a trap which they only narrowly escaped after being warned by nearby British warships. The Turkish forces were eventually driven back and their attempt to reclaim Egypt failed.

New Zealand troops returned to their preparations for their first major campaign of the war, the invasion of the Gallipoli Peninsula.