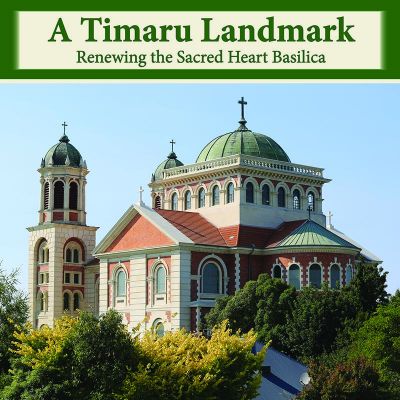 Now on: A Timaru Landmark

The Sacred Heart Basilica has been an anchor of Catholic identity and a significant feature of the Timaru urbnan landscape for over a century since it opened in 1911. Since April 2019 the building has been closed while renewal work, including earthquake strengthening, is being undertaken.

The earthquakes experienced by Canterbury in 2010 and 2011 raised concerns about many historic buildings. In the years that followed new building standards were developed. Many congregations located in historic churches around the region were forced to seek alternate premises while their structures were assessed. Luckily, the Sacred Heart Basilica was not significantly affected like so many others. Even so, the parish and diocese began assessing their options to improve the safety of the Basilica for parishioners and visitors.

Scaffolding began rising around the church earlier this year, but anyone driving past might struggle to understand what the work entails or see the progress being made. This exhibition explores what is involved in the work at the Basilica.

Local photographer Nick Anderson has been documenting the work through various stages. His images help show the tight spaces in and above the building walls where the contractors have been toiling away.

In addition to exploring the current work several huge historic images from the church by William Ferrier, taken at the time of its construction in 1911, are compared with modern images from a similar vantage point. These show the changes the church has borne witnessed in its surrounding neighbourhood over the last century or so.

The exhibition runs until 9 February 2020.

For a fantastic free day out in Timaru visit the South Canterbury Museum.

Explore our two levels full of local nature, history and culture, including film presentations in our Heritage Theatre.

With loads of interactive exhibits and special programmes for children and adults, there is something for everyone to enjoy.  Don't miss a great day out!