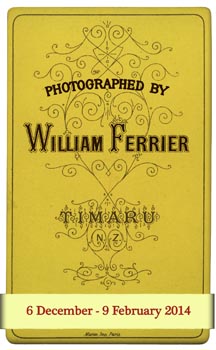 Photographed by William Ferrier was initially developed as an exhibition at the South Canterbury Museum that ran from December 2013 until February 2014. The exhibit proved incredibly popular with visitors who could explore more than 250 of Ferrier's images including an impressive panoramic of Timaru taken from the dome of the Sacred Heart Basilica in March 1911.

While this online exhibition features far fewer images, it offers an introduction to Ferrier's life and work, plus offers some options for those interested in exploring further some additional information or more of his work.

Born in Scotland in 1855, William Ferrier came to New Zealand with his widowed father and siblings on the William Davie in 1869. Initially the family went to Oamaru, then briefly to Timaru, before moving to Christchurch where Ferrier first moved into the photographic trade. After a few years the family returned to Oamaru, and Ferrier began a partnership with John Rock (as 'Ferrier & Rock'). He left the business in early 1881 to strike out on his own in Timaru.

William Ferrier was to become South Canterbury's longest serving and probably most recognisable photographer. His work provides a visual history of Timaru, and to a lesser extent the district. Ferrier served the district for forty years, recording some of the region's most important years of growth and maturity. 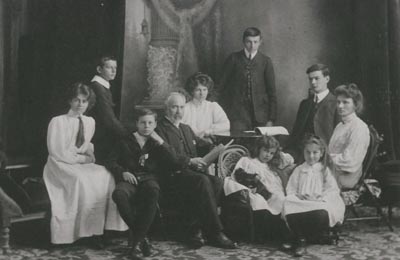 Ferrier was described as a humble man who pursued his calling in an '…unobtrusive way, living in the realm of art…' and…a photographer beyond the average'.

After opening his studio in Timaru, in May 1881, Ferrier began regularly advertising his services. However, his work received little public comment until a panoramic series providing 'capital views' of Timaru from the Post Office was reported on in September 1882. Landscapes, including panoramas like these, were to be his forte.

Initially local competition came largely in the form of Harry Coxhead and Rudolph Haigh. Both moved on though and by the end of 1887 Ferrier had become the district's longest serving photographer.

In 1887 Adolf Fischer arrived to challenge Ferrier's local dominance. Fischer kicked off something of a 'price war' by offering 12 cabinet cards for 15 shillings (normally 25). Ferrier responded quickly offering the same for 12 shillings and 6 pence. 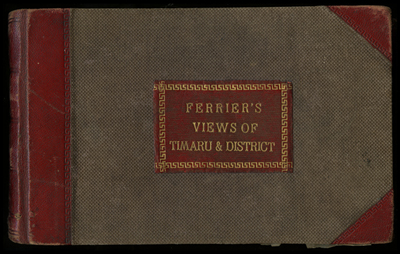 The rivalry was soon put aside when 'foreign' competition from visiting photographers arose - the local firms banding together to appeal to the public to support their local businesses. The 'foreigners' appear to have been seen off and business settled into a steady stream and advertising became less lively.

By 1900 Ferrier's reputation was well established and his business was probably at its peak, but an influx of new photographers was on the horizon. Some excelled in portraiture, complementing Ferrier's recognised ability with landscapes. But the local scene became increasingly competitive with the arrival of others including Alfred Hardy, Frederick Muir (Mahan & Muir), Frederick Halford, S Beatty, J Milne Allan, and J E Piggott. Periods of intense local competition amongst the new photographers resulted - but Ferrier appears to have remained aloof, comfortable in his established position.

Creating photographs in the nineteenth century was often treated as a strange combination of art and alchemy with a hint of the magical – as the description of new studios often reflect. The processes involved had come a long way since the daguerreotypes of the 1840s but were still not accessible or understood most people.

Ferrier primarily used the gelatin dry-plate photographic process developed in the late 1870s. Mass produced plates of glass coated in light-sensitive gelatin emulsion could capture images with an exposure of a fraction of a second. Plates could be exposed to capture a sitting or landscape image and then kept in the dark until returned to the studio darkroom for development.

By the late 1880s nitrate sheet and roll-film were becoming available, but remained much less reliable and produced lower quality images.

Ferrier however was not afraid to try new photographic and printing processes. In 1902 he was noted as trialling a carbon process that had been established in Europe but was not often seen in New Zealand. The process resulted in prints being able to be reproduced in different tints – black, brown, terracotta, and dark blue. Previously he had displayed stereoscopic images in 1891, offered platinotype (platinum) prints in 1895 and 'Rontagen Sciagraphs' or 'Radiograph' (X-ray) images in 1896 and 1899 that were able to show the bones inside a hand. 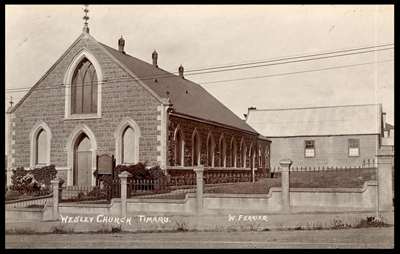 Soon after his arrival in Timaru William Ferrier became a lay preacher for the local Wesleyan Methodist Church (a post he held for ten years). He also taught in the Sunday School and served as the Vice-President of the Wesleyan Mutual Improvement Society.

Despite ceasing to be a lay preacher he still took services as late as April 1918 on assorted subjects including abstinence and the fall of man. He also gave talks and demonstrations on photography and supplied or operated a magic lantern when slides were required.

The Ferrier family has an artistic tradition and William was no exception. The ability was an asset to his business – allowing him to produce quality prints and enlargements finished in oils, pastels or watercolours. Additionally, over the years, the Timaru Herald often noted his paintings entered in local, national, and international exhibits. He sold his own oils and watercolours from his studio, often focusing on local harbour and coastal scenes. While his own painting success was perhaps modest, it did later influence his artistic grandson, Colin McCahon.

Ferrier also supported others in the art community, exhibiting other artists' works in his studio windows. He also offered painting classes in the early 1890s, served on the committees for local exhibitions and was one of the 'moving spirits' in the formation of the South Canterbury Arts Society.