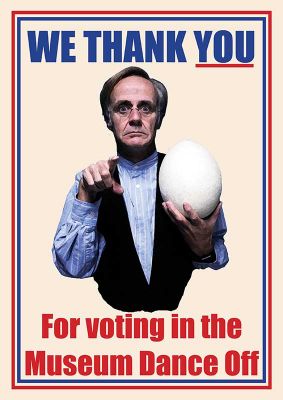 Thanks to overwhelming community support, the Museum has won the first (NZ) round of the International Museum Dance Off for 2018.

Competition came from the Otago Museum, National Army Museum, Air Force Museum and the New Zealand Rugby Museum in the New Zeeland round.  During voting though the competition became a two-horse race as the day went on, with Otago Museum votes steadily threatening to catch up with those being cast for the South Canterbury Museum.  But, by the close of voting at midnight Tuesday, the massive community support given to the Museum saw South Canterbury secure a strong victory margin.

Voting for other regions is continuing over the next couple of weeks. Then, in May, the South Canterbury Museum’s video will be pitted head-to-head against the winner of another round, so watch this space for more or follow our Facebook page at www.facebook.com/SCMuseum to keep up to date.